Welcome to the Monthly Round-up for January 1980. The first in our chronological journey here at Project Territories.

It’s the beginning of a new decade in professional wrestling and January 1980 provided us of some great action to kick off the 80’s in style. Here we travel with the NWA World Heavyweight Champion Harley Race and learn about his title defences. We will check-in at all the NWA affiliated territories and find out what has happened over the past 31 days. We will reveal the Top Ten contenders to Race’s World title and the top contenders for the NWA World Tag Team Championships.

All that and we will also let you know what we feel is the best match in the month of January 1980. Read on…

NWA World Heavyweight Champion Harley Race defended his title nine times in a tough month, where he only actually won three matches, including two in one day. He gained victories against Roddy Piper (Vancouver – 7/1), Ray Stevens by DQ (San Francisco – 26/1) and Frank Dusek (Los Angeles – 26/1). He lost twice via disqualification, once against Rick Martel (Portland – 8/1) and the other versus Andre the Giant (San Bernardino, CA – 20/1). Andre and Martel also held the champ to a draw and to open the month, Race was held to a 60-minute time-limit draw against young Texan David Von Erich (St. Louis – 4/1).

The New Year Giant Series tour ran for 16 days and on the opening day, English mat-technician Billy Robinson won the annual New Year battle royal. Despite being 5ft 11inches tall, he outlasted some big guys to win – Bruiser Brody, Angelo Mosca, Jumbo Tsuruta and Giant Baba are all competitors that tower above Robinson. Robinson look to continue his success on night six, as he battled Jumbo Tsuruta to a 60-minute draw for the NWA United National Heavyweight title.

On Night 3 of the tour, Baba and Tsuruta were lucky to hang onto their NWA International Tag Team titles against Brody and Mosca. In a nearly 20-minute battle, both teams were disqualified in a ‘Best of Three Falls’ but with the score level at 1-1.

The final highlight of the tour saw Brody nearly clinch the PWF Heavyweight title from Baba. The big man from Sante Fe, NM took a 1-0 lead in a ‘Best of Three Falls’ match but failed to capitalise. 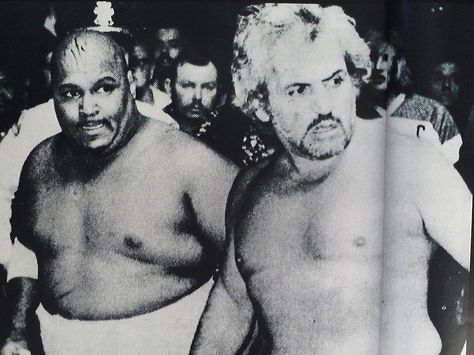 A quiet month for Detroit with just two shows promoted, although in a big tag team main event, The Sheik and Abdullah the Butcher (pictured above) defeated Chief Jay Strongbow and Dory Funk Jr. in a bloody war on the 19th at the Lincoln Park Community Center.

Despite being victorious in the Cow Palace Battle Royal on the 26/1, “Crippler” Ray Stevens was unable to take down NWA Worlds Heavyweight Champion Harley Race earlier in the night. Stevens was disqualified and uncertain to receive a rematch anytime soon.

Fritz Von Erich promoted a card in Waco, TX on the 2nd. Headlining was Andre the Giant, who joined forces with Kerry von Erich to defeat The Spoiler and Mark Lewin.

At a big Memorial Hall show in Kansas City (17/1), The Avenger lost his NWA Central States Heavyweight Title to The Assassin in a battle of the masked men.

The war between NWA Florida champ Manny Fernandez and Leroy Brown rages on throughout the month with Fernandez coming out on top every match. The final match of the month (29/1 – The Armory Tampa, FL) is for both Manny’s title and also Leroy’s NWA Florida Southern Heavyweight championship. The match ends up in Fernandez’s favour once again. This time via a DQ.

The NWA National TV title was a hot potato in January on Georgia TV. First, on the 5/1 show, Steve Travis upsets champion Austin Idol to win the strap. A week later, Idol won it back from Travis and then at the big Omni show on 27th, Idol loses the title to Boston native Kevin Sullivan.

Also at the 27/1 Omni show, the Atlanta crowd witnessed the return of Bruiser Brody to the territory. Bob Backlund successfully defended the WWF title against Toru Tanaka (accompanied by Gorgeous George). In a battle of former NWA World Champions, Dusty Rhodes defeated Terry Funk in the semi-main event.

Paul Boesch promoted two killer cards at the Sam Houston Coliseum this past month. On the 4th, the main event saw Andre the Giant win a 20-man two-ringed battle royal. He spoke to Boesch in a candid interview before the bout, as did “Gorgeous” Gino Hernandez (pictured above). The 23-year-old cocky superstar had some choice words for Andre and called him “a freak”. Unfortunately for Gino, after working well eliminating Wahoo McDaniel in ring two, Andre (the winner of ring one) eliminated Gino with an Atomic Drop to win the $22,000 battle royal. Also on the card, Dusty Rhodes defended his NWA Texas Brass Knuckles title against “Superstar” Billy Graham in a bloody war.

On the 11th January they ran the Coliseum again and Gino (with newly bleached blonde hair) was in action against Kevin Von Erich but ended up losing to Von Erich on a DQ. In the main event, JJ Dillon’s team of Mr. Hito and Mr. Sakaruda defeated Tiger Conway Jr. and Jose Lothario for the NWA American Tag Team titles.  After a few double team moves, Hito hit Conway with a vicious chop to the throat to end the two week reign of Lothario and Conway.

Just one live event for Maple Leaf this month – 13th at the Maple Leaf Gardens, Toronto. As part of the partnership with Mid-Atlantic Championship Wrestling, the main event featured a return bout from the month previous as Dewey Robertson and Ric Flair defeated Jimmy Snuka and Ray Stevens. This avenged a loss they suffered in December. In addition, Bob Backlund defended the WWF title against The Destroyer – a match that ended in a double count-out.

On New Years night, Ricky Steamboat and Jay Youngblood (pictured above) retained the NWA World Tag Team straps in a brutal war inside the steel cage against Paul Jones and Baron Von Raschke. On TV, the newly created team of “Crippler” Ray Stevens and Greg “The Hammer” Valentine cut a promo challenging the World Tag champs. Later in the month, Stevens and Valentine were interviewed displaying edgy behaviour as the champs were allegedly delaying in signing the contract for the title match. They stated if they did not get their shots soon something “drastic” was going to happen. The week after, with Ricky Steamboat out of town on a “speaking engagement”. Stevens & Valentine brutally attacked Jay Youngblood and left one-half of the tag champs battered, bloodied and had some of his hair cut.

Bob Caudle and David Crockett announced that a 16-man tournament would take place for the vacant NWA Television Title with a plethora of talent competing for the championship. A board was unveiled with all the first-round matches: Masked Superstar vs. Mr. Wrestling II, S.D. Jones vs. Frankie Lane, Brute Bernard vs. Johnny Weaver, Paul Jones vs. Tony Garea, Matt Borne vs. Swede Hanson, Rufus R. Jones vs. Baron Von Raschke, Ox Baker vs. Austin Idol, Dutch Mantell vs. Blackjack Mulligan. As of the time of writing, S.D Jones, Paul Jones, Rufus R. Jones and Johnny Weaver have progressed to the second round.

A youngster from Stampede Wrestling made his debut on the New Year Golden Series tour. The 22-year old Dynamite Kid, born in Manchester, England, has been on a tear in Calgary and made a decent start to his career in NJPW with wins over Kantaro Hoshino and Yoshiaki Fujiwara in his opening two matches. Towards the end of the month, he was tagging with fellow Gaijin’s Stan Hansen, Rocky Johnson, Skip Young, Steve Keirn and Bad News Allen. Next month, he is set to get a return bout with WWF Junior Heavyweight Champion Tatsumi Fujinami in Nagoya, Japan. He narrowly missed out winning the strap from Fujinami in Calgary last summer in an excellent 20-minute match that finished in a double count-out.

Although he was scheduled to face Ray Stevens in San Francisco that evening, Harley Race successfully defended the NWA Worlds title against Frank Dusek in the afternoon at the Olympic, Los Angeles on the 26th November.

At the Sports Arena in Portland, Oregon, Harley Race retained his NWA Worlds Championship but he was defeated by Rick Martel on a disqualification on the night of the 8th. Martel gained a rematch on the 12th previously winning a battle royal earlier that night. He came out short and was denied the belt as Race held him to a time-limit draw – See Match of the Month.

A major show at the Kiel Auditorium on 4th January was headlined with three main events. Bob Backlund successfully defended the WWF Title against Tom Andrews. Kevin Von Erich and Dick Murdoch fought to a Double DQ over the NWA Missouri Heavyweight belt. And in the main event, Kevin’s brother David took NWA World Heavyweight Champion Harley Race to a one-hour draw in front of over 11,000 fans.

In Calgary, Mr. Sekigawa started off January denying Keith Hart from taking his Stampede North American title. On the 11th he lost by DQ to Hart and on the 18th a rematch ended in a no-contest. Meanwhile, Hart and his brother Bret Hart successfully defeated Hubert Gallant and Leo Burke to hold onto their Stampede International Tag titles on the 4th.

The first NWA Heavyweight Title defence on international soil of the year was held in Canada as Harley Race successfully defended against Roddy Piper.

At the Civic Center in Baltimore, Hulk Hogan faced Andre the Giant in their first known match on the 5th January – it ended as a draw.

Throughout the month on WWF TV, there were interesting happenings between Bruno Sammartino and his protégé Larry Zbyszko. For the weeks leading up to the new year, Sammartino (now working as a commentator) wished to interview Zbyszko but received no response. Vince asked Zbyszko a week later why he had been ignoring interview requests from Bruno Sammartino. Larry stated that although he respected Bruno, he wanted a ‘scientific exhibition match’ with him as he was sick of labelled “Bruno’s protégé”. Bruno declined to face him. McMahon held another Zbyszko interview on the next TV show and Larry said if Bruno refuses to face him to prove himself, then he would retire. Bruno appeared and accepted the match but clearly stated that he feels like Larry is a brother and his goal was not to beat Zbyszko.

A war between WWC Puerto Rican champion Abdullah the Butcher and Carlos Colon raged on in Bayamon at the Juan R. Loubriel Stadium on the 5th and 12th of January. Abby recently defeated Colon to win the title on 15th December in the same arena. After a no-contest was called to the 5/12 match, the governors of the WWC decided to vacate the title and issue a rematch for seven days later. Colon beat Abdullah to become a five-time titleholder.

There’s lots of great stuff this month, but one match I recommend you go out of your way to find is from 12th January 1980 and in the Pacific Northwest Wrestling promotion from the Sports Arena, Portland, OR. It’s the NWA World Heavyweight Title Match with champion Harley Race facing the challenge of young Canadian Rick Martel.

Video is split into three parts below…

Mid-Atlantic: The NWA TV Title Tournament continues and will Ricky Steamboat return to the TV show to gain revenge on Stevens and Valentine.

WWF: Bruno Sammartino has accepted the challenge of his protégé Larry Zbyszko. Zbyszko has asked if the match can take place on television and we should see that bout in February.