Paul Boesch left a legacy in Houston and Texas in general, as the heart and soul of professional wrestling to the thousands of fans that had witnessed his product. Through his efforts, Boesch had turned Houston into one of the best promotions in the territories era.

Boesch was born in Brooklyn, New York until him and his family moved twenty miles to Long Beach.  He went on to graduate from Long Beach High School in the summer of 1929 and Boesch was a natural athlete. To earn money, he got a job as a lifeguard on the Long Island beaches and during this time, he was lured by Jack Pfefer’s wrestling shows in New York.

Although he is build was athletic, he was never the biggest of guys but he started to train and he stepped into the ring himself on 25th October 1932 in Staten Island for a Pfefer show. He continued to build a good living and wrestled throughout the northeast and travelled to St. Louis on occasion.  Although never a headliner, Boesch was regularly booked and toured through Canada, California and the South Pacific.  During this time, he became good friends of Calgary wrestler and promoter Stu Hart, and Boesch had the privilege of introducing Stu to his future wife Helen, while the Canadian was wrestling in the New York area.

Once World War II broke out in 1939, his career came to a halt as he enlisted to fight in Germany.  Boesch was deployed over to Europe and serve for the States in the one of the fiercest conflicts of the war – “The Battle of Hürtgen Forest”.  Although he received some injuries, he returned home a hero and was awarded many medals including the Purple Heart and the Combat Infantryman Badge and the Distinguished Unit Citation.  Boesch wrote and released Road to Huertgen: Forest In Hell later in 1962, which was his memoirs of the battle.

Missouri wrestling promoter Tom Packs invited members from Boesch’s Regiment to the wrestling program labelled “The GI Night” on 5th October 1945 at the Kiel Auditorium.  It was a tremendous tribute and honour for Boesch, who climbed into the ropes to defeat Dick Lever using judo holds in front of over 8,000 in attendance. In the crowd were 118 members of the Gray Bonnet Regiment and 26 convalescents from the Jefferson Barracks who had served with Boesch throughout his military career.

Paul “Bombshell” Boesch settled in Houston wrestling full-time for the Gulf Athletic Club under the leadership of promoter called Morris Sigel.  Just after the first World War, Morris’ brother Julius had started promoting wrestling shows at the City Auditorium, weekly on Friday nights to great success.  By 1929, Julius left Texas to promote shows in New Orleans and Shreveport in Louisiana, leaving the promotion in the hands of his brother.

Although Morris was inexperienced in the wrestling business, he steered the promotion though good times with his robust business wisdom and the likes of Jim Londos, Orville Brown, Lou Thesz, Wild Bill Longson, Buddy Rogers and Womens’ Champion Mildred Burke on his cards.  Sigel would surround himself with people capable of running wrestling shows and during this time, due to a horrific car accident, Boesch would ultimately become one of Morris’ employees.

On 22nd October 1947, Paul was travelling to Corpus Christi for a show with two other wrestlers, Frank Vallois and Miguel Guzman.  They did not make the show that night. A trailer truck had failed to break at a stop sign and crashed into Boesch’s vehicle on Highway 66 and Military Drive in San Antonio – all three were injured.  Boesch suffered a break in his right leg and numerous cuts on his head and face.  The injury to his leg was fatal to his wrestling career as doctors advised him never to compete in the ring again.

Paul reached out to Morris and Boesch took up administrative duties in the office and trained young wrestlers – he even taught Verne Gagne how to apply the sleeper hold.  This would then escalate into commentating on Sigel’s wrestling bouts on radio station KLEE and in January 1949, Boesch would present the first-ever televised wrestling show in Houston simply named “Houston Wrestling with Paul Boesch” – a show that aired for nearly forty years!

Boesch would also occasionally step back in the ring throughout the early 1960s and this spiralled into eventually booking his own shows when Morris sadly passed away on Boxing Day in 1966.  In early 1967, he purchased the promotion from Morris’ wife and held good relationships with both the National Wrestling Alliance and Verne Gagne’s American Wrestling Association, so he had a wealth of talent at his disposal.  Bringing the very best wrestlers to the Sam Houston Coliseum would elevate the venue as the home of Houston Wrestling.

This was the biggest arena in the area and for Boesch’s shows, the Coliseum would sell-out to nearly 10,000 fans.  The venue held some big championship matches, but it was never acknowledged by nationwide wrestling fans as a legendary arena in comparison to the likes of Madison Square Garden, the Kiel Auditorium and the Greensboro Coliseum.

Boesch caught the attention of the NWA which declared Houston “The Wrestling City of the Seventies” at their annual convention and it became home to many World Heavyweight title bouts but only one title switch happened at the Coliseum – Jack Brisco defeating Harley Race on July 20th 1973.

Throughout the years, Boesch formed relationships with many affiliates of the NWA with the likes of Joe Blanchard’s Southwest Wrestling but one of the most profitable connections was with Fritz von Erich’s Big Time Wrestling.  The Texan Fritz and his sons were huge draws for Boesch and this continued until they severed ties in 1981 as Fritz looked to expand his promotion.

In 1981, NWA world champion Harley Race failed to attend an event despite being heavily promoted, Boesch was dismayed that he felt he had let the Houston fans down. He took action and immediately informed the NWA that he was withdrawing his membership.

Boesch forged a relationship with Bill Watts’ Mid-South Wrestling. Stars like Magnum T.A., Butch Reed, Steve Williams, Jim Duggan and tag teams like the Midnight Express and the Rock N’ Roll Express all ventured into the Coliseum and did tremendous business. 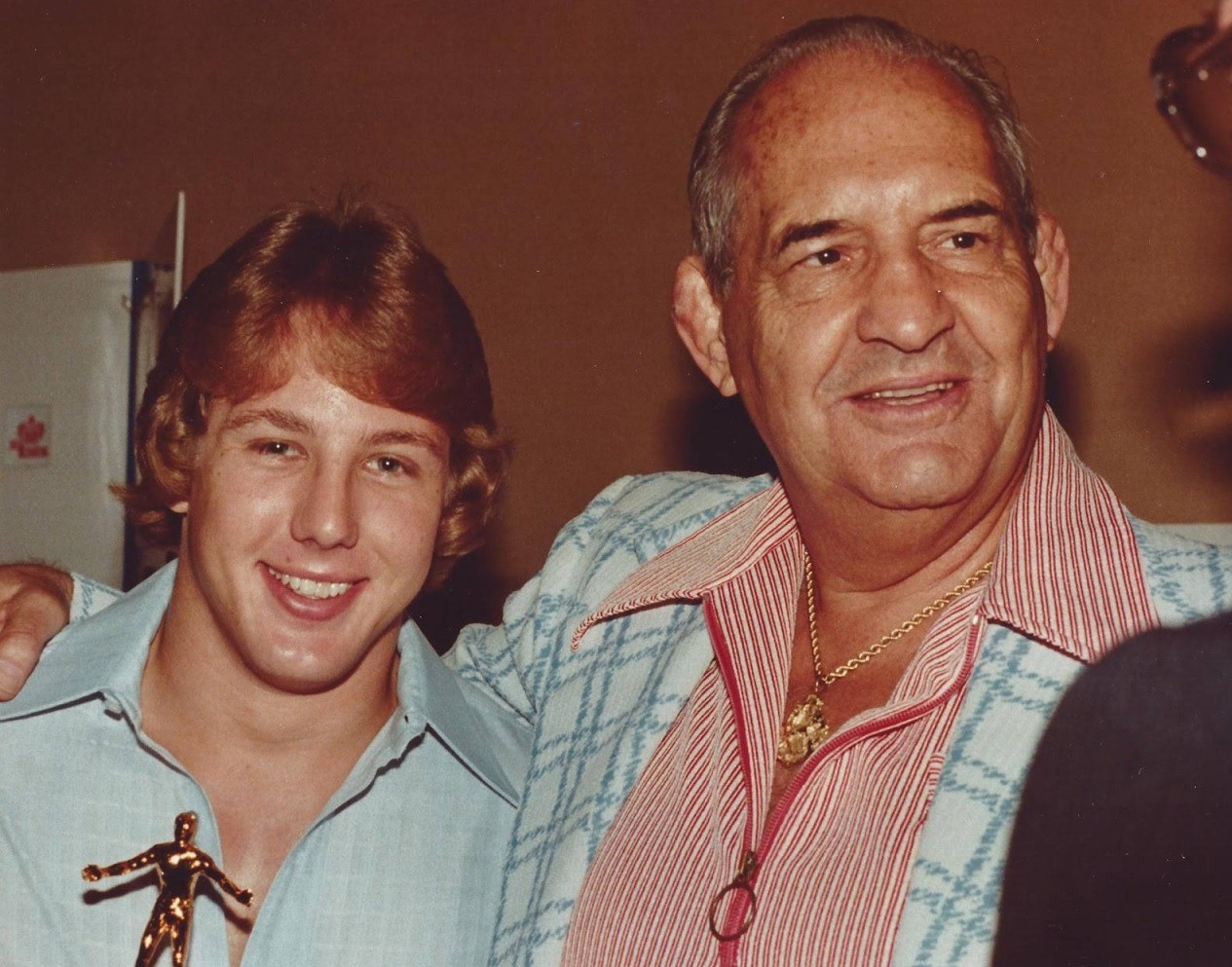 A young Tom Pritchard with Paul circa 1982As 1984 emerged, Boesch and Watts was forced into competition with Vincent K. McMahon’s World Wrestling Federation as the McMahon-owned Titan Sports invaded Texas and secured TV time on two independent stations KTXH (Houston) and KTXA (Dallas and Fort Worth).  The fans, that had only ever known Boesch’s product, took to the WWF programming well and Boesch, Watts and Von Erich merged to compete with Titan’s shows.

In early 1987, Watts sold his promotion to Jim Crockett Promotions and Boesch was forced to arrange a deal with the Vince McMahon to hold WWF shows in Houston.  This was a huge transformation from the city’s longstanding run with the NWA and Watts.  Professional wrestling was experiencing a transitional period and WWF was implementing a different style of the sport – a huge contrast to Boesch and his predecessors’ product.  The deal only lasted four months and Boesch eventually shut down his Friday night shows at the Coliseum. The end of Houston Wrestling.

Due to failing health, after 55 years of contributions to the sport as a wrestler, a referee, a radio commentator, a TV announcer and a promoter, Boesch decided to call it a day on 28th August 1987.  On that night, McMahons’ WWF hosted his retirement show at the Coliseum in his honour.  He had drawn a sell-out crowd one last time.

Boesch did temporarily return and made a deal with Crockett in 1988, so JCP’s stars would wrestle at the Sam Houston Coliseum and they agreed that Boesch would also have an on-air role.  However, like the WWF deal, this did not last long Crockett sold his promotion to Ted Turner in November of that year.

Aged 76 years, Paul sadly passed away on March 7th 1989, after suffering a heart attack at his home in Sugarland, Texas.

Boesch was not only a war hero for his country. Due to his lifelong commitment to the industry, he was a hero in many eyes in professional wrestling.

A flashback from our review of 1980.
**NEW** We return with a full monthly review of February 1981.
Are you ready for some new content?
**NEW** We are back as our journey ventures into 1981!
COMING TOMORROW TO PROJECTTERRITORIES.COM
Coming soon.